The new Windows 8 bits were demo’d this week at Microsoft’s BUILD conference, and it’s sparked a lot of discussion in the developer community.

Microsoft is turning a new leaf: all existing Windows apps are now “legacy” apps. They’ll only work in this super-special classic Windows desktop that runs, itself, as an “app” in Windows 8. 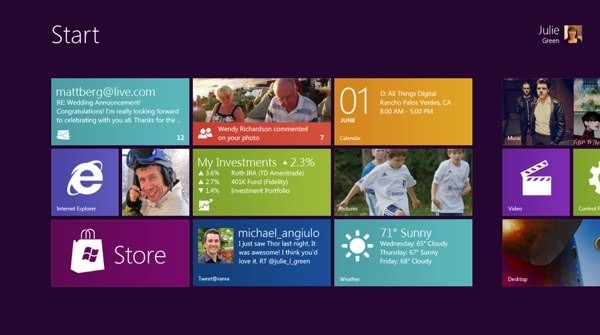 Times, they are a-changin’.

Over at CodeProject, there was a discussion about all this changing, and how all the UIs are big and dumbed down and instead of a million menu items we have a big ribbon with big icons and oh what are we to do?!

You must understand that Windows 8 isn’t about managing files. It’s about updating your status on facebook, sharing photos, and downloading MP3’s.

Or perhaps better stated, Windows 8 is for consumers, and that isn’t necessarily a slam. MS is making Windows friendly to regular, non-nerdly types. Consumers don’t like file systems. So it’s largely hidden from view.

I remember back in the late 1990s, a tech futurist had predicted that file systems would disappear from the consumers view eventually. At the time I thought he was a little crazy, but now I see the wisdom in what he was saying: only nerds care about file systems. We have good reason to care about file systems. But most end users don’t, and in fact, letting non-nerdly types futz with the file system might actually be a bad idea.

Even the whole Metro environment aligns with this idea that, unless you know what you’re doing, all your apps should be isolated and safe by default. Want an app that does something outside that box? Ok, open the car hood, crack open the full Windows desktop, install that bad boy. But for everything else, and for most apps, and for most people, you don’t need that, and in fact, having that power is detrimental as non-nerds tend to install dubious apps that crap all over their systems.

I hope all my relatives and friends who call me to fix their systems, I hope they all install Windows 8 when it’s out. And I hope they never have to crack open the hood and futz with their file systems, or need to install “classic” Windows apps. If they stay in their walled Metro garden, they won’t need me to bail them out every few months.