Summary: A modern dev stack for modern web apps. See how I built a new web app using RavenDB, Angular, Bootstrap and TypeScript. Why these tools are an excellent choice for modern web dev. 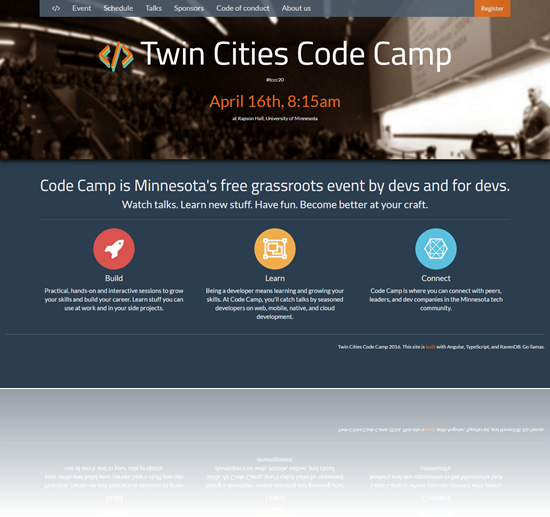 Twin Cities Code Camp (TCCC) is the biggest developer event in Minnesota. I’ve written about it before: it’s a free event where 500 developers descend on the University of Minnesota to attend talks on software dev, learn new stuff, have fun, and become better at the software craft.

I help run the event and this April, we are hosting our 20th event. 20 events in 10 years. Yes, we’ve been putting on Code Camps for a decade! That’s practically an eternity in internet years.

For the 20th event, we thought it was time to renovate the website. Our old website had been around since about 2006 – a decade old – and the old site was showing its age: 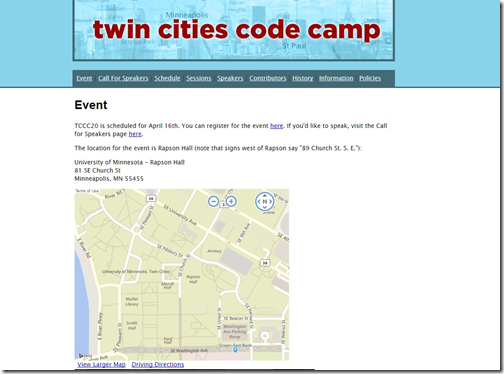 It got the job done, but admittedly it’s not a modern site. Rather plain Jane; it didn’t reflect the awesome event that Code Camp is. We wanted something fresh and new for our 20th event.

On the dev side, everything on the old site was hard-coded – no database – meaning every time we wanted to host a new event, add speakers or talks or bios, we had to write code and add new HTML pages. We wanted something modern, where events and talks and speakers and bios are all stored in a database that drives the whole site.

Taking at stab at rewriting the TCCC websiite, I wanted to really make it a web app. That is, I want it database-driven, I want some dynamic client-side functionality; things like letting speakers upload their slides, letting attendees vote on talks, having admins login to add new talks, etc. This requires something more than a set of static web pages.

Additionally, most of the people attending Code Camp will be looking at this site on their phone or tablet. I want to build a site that looks great on mobile.

To build amazing web apps, I turn to my favorite web dev stack:

I find these tools super helpful and awesome and I’m pretty darn productive with them. I’ve used this exact stack to build all kinds of apps, both professional and personal:

And a bunch of internal apps at my current employer, 3M, use this same stack internally. I find this stack lets me get stuff done quickly without much ceremony and I want to tell you why this stack works so well for me in this post.

I’m at the point in my career that I don’t put up with friction. If there is friction in my workflow, it slows me down and I don’t get stuff done.

RavenDB is a friction remover.

My old workflow, when I was a young and naïve developer, went like this:

This went on and on. It wasn’t until I tried RavenDB did I see that all this friction is not needed.

SQL databases were built for a different era in which disk space was at a premium; hence normalization and varchar and manual indexes. This comes at a cost: big joins, manual denormalization for speed. Often times on big projects, we have DBAs building giant stored procedures with all kinds of temp tables and weird optimization hacks to make shit fast.

With Raven, you just store your stuff. Here’s how I store a C# object that contains a list of strings:

And when we’re ready to query, it looks like this:

Notice I didn’t have to do any joins; unlike SQL, Raven supports encapsulation. Whether that’s a list of strings, a single object inside another object, or a full list of objects. Honey Badger Raven don’t care.

And notice I didn’t have to create any indexes. Raven is smart about this: it creates an index for every query automatically. Then it uses machine learning – a kind of AI for your database – to optimize the ones you use the most. If I’m querying for Talks by .Author, Raven keeps that index hot for me. But if I query for Talks by .Bio infrequently, Raven will devote server resources – RAM and CPU and disk – to more important things.

The end result is your app remains fast, because Raven is responding to how it’s being used and optimizing for that.

And I didn’t have to do anything make that happen. I just used it.

If you’re doing .NET, there really is no reason you shouldn’t be using it. Having built about 10 apps in the last 2 years, both professional and side projects, I have not found a case where Raven is a bad fit. I’ve stopped defaulting to crappy defaults. I’ve stopped defaulting to SQL and Entity Framework. It’s not 1970 anymore. Welcome to modern, flexible, fast databases that work with you, reduce friction, work with object oriented languages and optimize for today’s read-heavy web apps.

In the bad ol’ days, we’d write front-end code like this:

JavaScript was basically used to wire up event handlers. And we’d do some postback to the server, which reloaded the page in the browser with the new email address. Yay, welcome to 1997.

Then, we discovered JQuery, which was awesome. We realized that the browser was fully programmable and JQuery made it a joy to program it. So instead of doing postbacks and having static pages, we could just update the DOM, and the user would see the new email address:

And that was good for users, because the page just instantly updated. Like apps do. No postback and full page refresh; they click the button and instantly see the results.

This was well and good. Until our code was pretty ugly. I mean, look at it. DOM manipulation isn’t fun and it’s error prone. Did I mention it was ugly?

This is data-binding, and when we discovered it in the browser, all kinds of frameworks popped up that let you do this data-binding. KnockoutJS, Ember, Backbone, and more.

This was all well and good until we realized that while data-binding is great, it kind of sucks that we still have full page reloads when moving from page to page. The whole app context is gone when the page reloads.

What if we could wrap up the whole time a user is using our web app into a cohesive set of views which the user navigates to without losing context. And instead of a mess of JavaScript, what if we made each view have its own class. That class has variables in it, and the view data-binds to those variables. And that class, we’ll call it a controller, loads data from the server using classes called services. Now we’re organized and cooking with gas.

Enter AngularJS. Angular makes it a breeze to build web apps with: 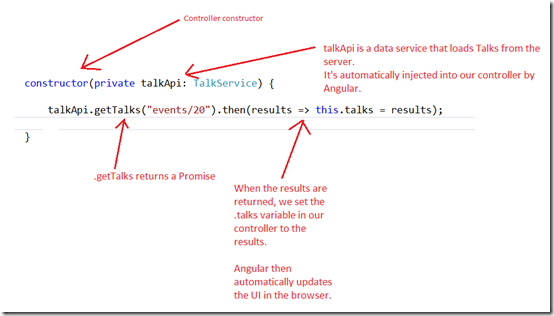 Nice clean separation of concerns. Makes building dynamic apps – apps where the data changes at runtime and the UI automatically shows the new data – a breeze.

JavaScript is a powerful but messy language. Conceived in a weekend of wild coding in the late ‘90s, it was built for a different era when web apps didn’t exist.

TypeScript compiles it all down to normal JavaScript that runs in everybody’s browser. But it lets you code using modern coding practices like classes, lambdas, properties, async/await, and more. Thanks to types, it enables great tooling experiences like refactoring, auto-completion, error detection. 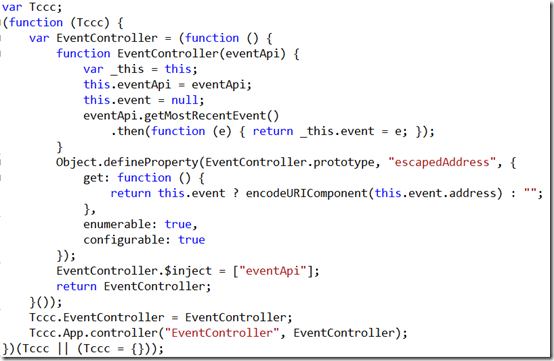 We can instead write concise and clean, intellisense-enabled TypeScript like this:

There are few reasons to write plain JavaScript today. It’s beginning to feel a lot like writing assembly by hand; ain’t nobody got time for that. Use modern language features, use powerful tooling to help you write correct code and find errors before your users do.

We’ve got code at our disposal that gives us a nice set of defaults, using well-known UI concepts and components to build great interfaces on the web.

Bootstrap, with almost no effort, makes plain old HTML into something more beautiful. 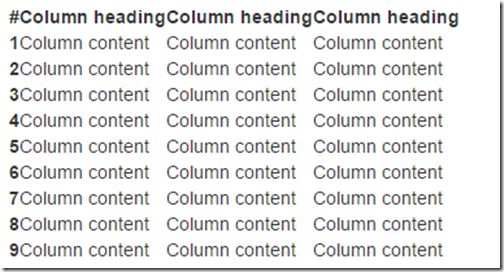 Add a Bootstrap class to the <table> and it’s suddenly looking respectable:

Add one of a few button classes and things start looking quite good:

Bootstrap gives you a default theme, but you can tweak the existing theme or use some pre-built themes, like those at Bootswatch. For TwinCitiesCodeCamp.com, I used the free Superhero theme and then tweaked it to my liking. 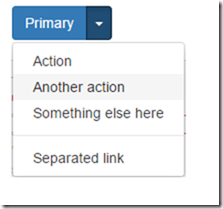 Bootstrap enables these components using plain HTML with some additional CSS classes. Super easy to use.

Add a few classes to your HTML, and now your web app looks great on any device. For TwinCitiesCodeCamp, we wanted to make sure the app looks great on phones and tablets, as many of our attendees will be using their mobile devices at the event. 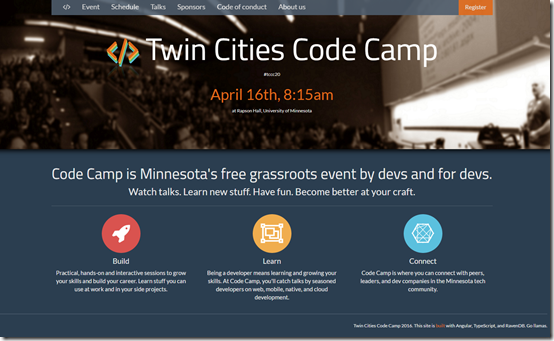 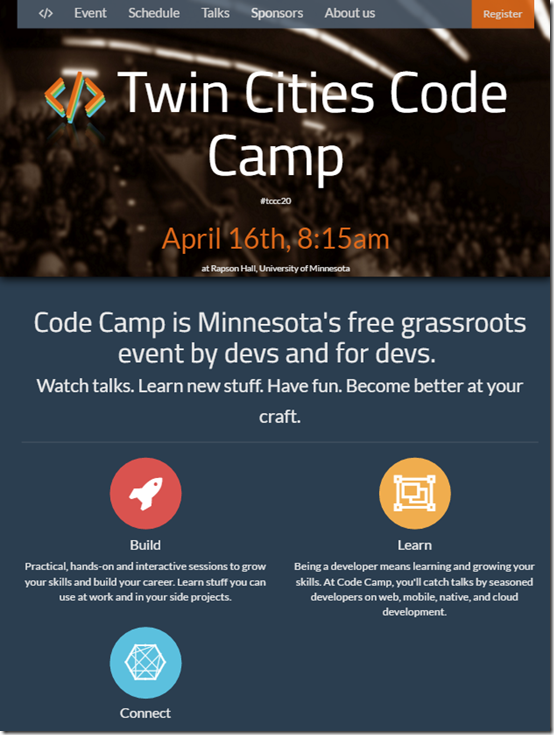 And on iPhone 6 and small phones: 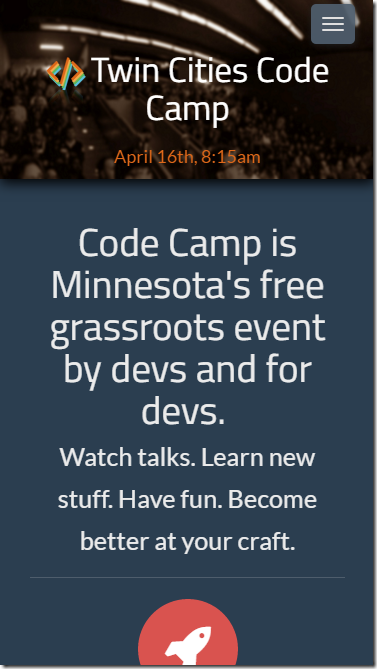 This is all accomplished by adding a few extra CSS classes to my HTML. The classes are Bootstrap responsive classes that adjust the layout of your elements based on available screen real-estate.

TwinCitiesCodeCamp code is on GitHub.